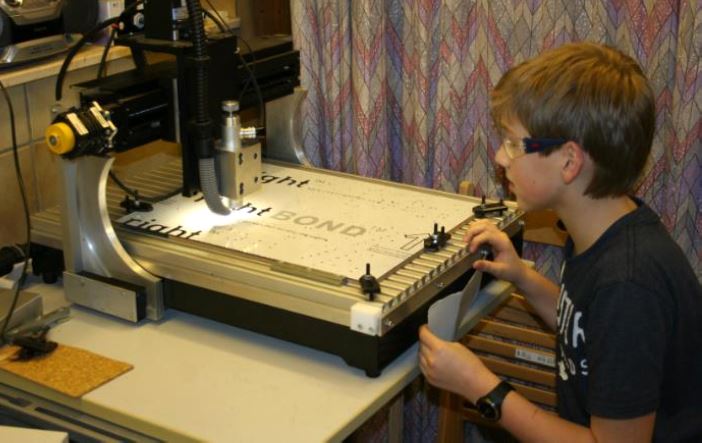 2. The caveman days
From today’s perspective, we were milling like “cavemen” back then. The operating system was DOS. The software was supplied on 5¼-inch floppy disks. My colleague wrote a batch file, with which he could compile several work steps. To shorten the machine time, he also wrote a sorting routine that optimized the tool paths. The computer time for isolation milling at that time was about 30 minutes for medium-sized projects (such as Europe card format projects). After that you had a data set with which you went to the machine and milled “blindly.” There was no possibility to perform a check or make corrections. All work steps were text based. We didn’t know any better – it was simply the state of the art, and it worked very well.

3. The epiphany
At the end of the 1990s I bought the CircuitCAM program (with BoardMaster) for Elmos because it represented a quantum leap. It ran under Windows and had a graphical progress indicator. Individual conductive traces could also be remilled with it. The milling operation could be stopped and then continued the next day. The machine was in operation at Elmos for many hours a day after that – for many years. Four departments made good use of it. Small repairs were necessary from time to time, but the machine basically ran without any Page 3/4 | Story of an LPKF Milling Machine LPKF Laser & Electronics AG, 2021problems until 2008. To this day, I can still find circuit boards in lab drawers, some of which are still in use.

4. The “dark” ages
The machine broke down in 2008. Over the course of many years, some mechanical parts had become worn, the electronics defective, and spare parts scarce. I was broken. Repair was too expensive, or not possible, and, in light of the new QFN housings for our products, the benefit was questionable for Elmos. The machine was taken out of service and stood around gathering dust.

5. The comeback
In 2010 I took over the completely defective machine from Elmos AG. Because my enthusiasm for this great and robust machine had not waned a bit, I set myself the goal of getting the machine functioning again. But I wanted to retain its original condition. Repair of the electronics was easy for the “old” technology. Thanks to eBay, it was also possible to buy the mechanical parts. After half a year, the completely disassembled mechanical system was repaired and fully functional again. I also received the kind support of two LPKF employees, who provided information to make the restoration much easier for me. My sons (aged 10 and 7 at the time) also helped.

6. Current status
I have now been using the machine in its original condition privately for circuit board milling for more than 10 years. Data conversion can now be done with a single click of a mouse and takes just a few seconds on modern computers, even for complex boards! To this day, I am thrilled with the precision with which this machine, which by now is 30 years old, works. It seems to be “indestructible”! The LPKF toolchain from 2001 can compete with modern systems to this day. Programs and operating systems come and go – but the LPKF machine remains! It is timeless!

I was so satisfied with this robust LPKF technology that in 2012 I bought a (used) LPKF milling machine (HI-P 101) – unfortunately, without an automated tool changer. It was in really bad condition when my son and I picked it up. Mechanical system defective, PCBs missing… First, I repaired the machine so that it could mill circuit boards again. This was easy because I could copy the missing PCBs from my Automill and mill them with my working machine. Then I dismantled the original portal, packed it well, replaced it with my own design, and placed a grooved plate on the LPKF plate. I designed the conversion in such a way as to be able to reconstruct the original LPKF circuit board milling machine within a few minutes. This machine has now become a precision portal milling machine that I also use to mill nonferrous metals and even wood. To do this, I still use the Jäger spindle used back then by LPKF; I had it completely overhauled by Jäger.

Conclusion
Both machines are in TOP condition and have excellent precision. When restoring the HI-P 101 Automill, I discovered mechanics as a hobby (besides electronics) and am very happy about that. My two sons spent a lot of time helping me in the basement at that time. They grew up with these LPKF machines and have milled quite a few things with them – and their occupational aspirations currently lie between electronics engineering and mechanical engineering. I am going to try to keep this robust LPKF technology alive in its original condition as long as I can. To be on the safe side, I read out the programmable ICs in the electronics in 2010 and saved the contents so that I could program a new IC at any time. I think this is a story that’s not history yet (… and if it’s well maintained, then it will still be milling in the future!).